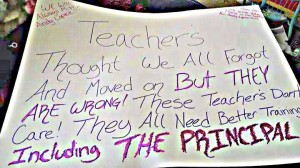 Yesterday I received an email from Justice for Andy Lopez coalition regarding the suspension of 24 Cook Junior High School Students in Santa Rosa for participation in a demonstration for the 6 month anniversary of the murder of Andy Lopez.  The facts as stated were as follows: 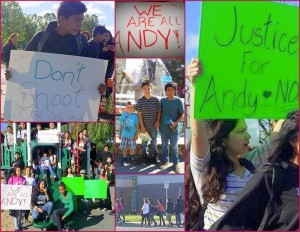 More facts were sent out from Santa Rosa City Manager based on information from the school district. The facts were as follows:

When I look at both sets of facts I have to analyze who has the power here?  Who has more to lose by revealing the truth?  Can both sets of facts be true?  In this day and age of camera phones, where are the photos from either side?  Or does any of that really matter?  Where does the truth lie?  What is true in both sets of facts is that students had a civil disobedience to protest the murder of a young man and the inaction of the District Attorney Jill Ravitch to address the actions of the Sonoma County sheriff.  Maybe we should celebrate that the fire of protest is still relevant and the voices for justice will not be silenced.  What can we do to support the actions of young people who are non-white in efforts to voice a protest to the politically-motivated inactions of the sitting DA?