I wrote the letter below in support of the middle school students holding a demonstration at their school on April 23, the 6 month anniversary of their school mate Andy Lopez’s killing by a Sonoma county sheriff. It appeared in the Press Democrat on April 24 and at 9:30 AM I received a phone call from an irate reader. He refused to identify himself but made it clear that the students were nothing but trouble-causers and people like me were ruining America. Interesting that in praising these young people for engaging in the activities needed to maintain a democracy, I should be accused of ruining the country. I was left with the feeling that media messages have so pervaded the culture that adults are actually afraid of 12 and 13-year old children who dare to question authority. Especially if those children are black or brown. And they are accusing the police of murder. I do believe that the level of anger expressed in that phone call reflects an unacknowledged recognition that much is wrong in Oz. 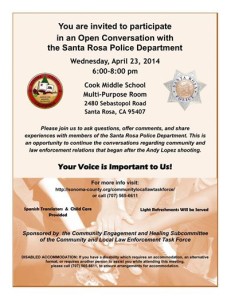 Too little too late?

Dear Editor,
Regarding the Cook Middle School student demonstration about Andy Lopez, as an educator who taught many years at a middle school, I feel pride in these young people participating in our democratic system in such a focused and organized manner. They feel an injustice occurred and want the courts to make a final decision.

Though I am unfamiliar with the school policies, I  imagine that in staging their memorial and carrying picket signs, they probably violated some of them. Even so, their actions should serve as a foundation for school-wide discussions of the various methods available in a democracy for having one’s voice heard. If their methods are not appropriate in a school, what methods might be?

Regardless of your beliefs in regard to what happened and who is at fault in the shooting of Andy Lopez, history shows us that trying to quiet voices speaking out against perceived injustice builds anger and resentment. These young people who still grieve the death of their school friend and are asking only for justice deserve to be celebrated for acting on their beliefs and putting in the hard work that is required to build an equitable society.