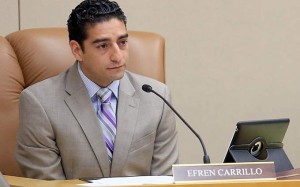 There has been much publicity lately around Fifth District Supervisor Efren Carrillo and his awful behavior as a public servant in Sonoma County. The talk ranges from ridicule to empathy—some calling for his resignation and jail time while a few have demonstrated compassion for his situation and have reached out in support (not just his family). I, myself, have been in disagreement with nearly all Carrillo’s politics since the beginning of his career. His personal choices have most certainly confirmed my beliefs around his character. However, that being said, I am choosing to look at his situation from a different angle and throw out some questions: Is there a possibility of redemption for Efren Carrillo? Or, has he been written off as a misogynistic, macho, alcoholic, sexual predator that has misrepresented his district and local community through practicing poor (status quo) policy and even poorer personal choices? I say the answer is yes to both. I agree with all those who challenge his personal character and his policies that fail to serve the community he claims as his and, I agree that many of his actions have been rooted in patriarchal, misogyny (think: his recent predatory action in which he attempted to break into a woman’s home for sex), machismo (think: San Diego bar brawl).

No doubt in the conscious mind that Carrillo needs to be removed from his position of District Supervisor and serve the consequences of his actions. It has been said by the local feminist community that, not enough, if any, attention or credence has been given to the victim of his latest crime. Once again, I agree. Acknowledgment of the victim is a necessary part of taking responsibility and an important ingredient in her healing process. It is clear to most that Efren Carrillo has some serious issues to work through, and, that as a person in a leadership position his choices have infected the greater community, although, it is unclear to many just what community he represents—surely there are those who feel misrepresented. It is as unfair to assume that Carrillo represents the local Latino/a community as it to say that Obama represents all black folks across the country or Mayor Jean Quan all Asians in Oakland. Status quo white folks have, do, and will continue to make this assumption though and in a white supreme-ass society it is only white folks that escape the assumption of being representative of all their people. In other words, Carrillo, from the perspective of many white folks, will not just be seen as an autonomous bad seed.

Had Carrillo represented well the community he claimed, like so many young freedom fighters are now, had he worked with North Bay Organizing Project to end deportations and local law enforcement’s relationships with ICE, focused on a just immigration reform policy, publicly supported ALMAS and the work they did to get Governor Brown to sign the California Domestic Worker’s Bill of Rights, championed restorative justice in our local schools, created funding for the Roseland Multi-Cultural Organizing Center complete with revolutionary murals (ala Orozco and Siqueiros) and radical Latina/o history classes offered for free to the public with a bakery to help said center sustain them, without a doubt, the local community would have embraced him as representative. Had he been arrested for a “sit in” at the Governor’s office, for blocking a deportation bus, or any other act of civil disobedience in solidarity with the immigrant community, then folks would be taking the streets to advocate for him.

He has instead behaved like a foolish, egocentric adolescent who serves the greedy, delusional status quo. His choices have stained his family and perhaps ruined his political career. The questions now are: Do we apply the concept of restorative justice to Mr. Carrillo?  Do we support him in his quest for redemption, supposing there is one? Does the grass-roots organizing community exclude him for his mistakes or, do they help him through a healing process so that he may potentially become a real leader? It is my understanding that this is what true community does. It creatively deals with difficult people/situations through a tough-loving process of rehabilitation, restoration, responsibility, redemption, renovation….

To merely punish Carrillo for his actions, in my humble opinion, would not be justice but would be subscribing to the revenge ethic that our current injustice system is based on. Like it or not, Carrillo is not just a failed politician and a macho predator, but a community member, who like all of us to a certain degree, has been conditioned by society—the fact that he is a public servant does not change this. Communities are full of people in need of help with their behaviors—people who are emotionally, physically, mentally, and spiritually ill. It is an anti-community society that breeds and helps to sustain these social illnesses. An anti-community society both punishes and excludes as a final solution for correcting misbehavior.

There are many examples throughout history in which troubled community members have fallen only to rise again on new feet to become great leaders—Malcolm X comes to mind quickly—what if folks had shunned him because of his “thug” past and didn’t value his teachings? One might argue it was the overcoming of his personal challenges that made him the leader he became. I know it’s a far stretch to compare Carrillo with Malcolm X, but who is to say what he might make of his self if he were to be guided through a reconditioning process? Does the community have a responsibility to help shape him? I think so. He has a story like we all do. Maybe by offering him an opportunity for redemption, his story can be learned, his behaviors better understood and, therefore, radically changed.

It would truly be a radical act were the activist community to reach out to him and offer him a path to restorative justice. The expectations would be the same as with anyone—full responsibility and ownership taken for actions committed, in depth therapy to work through all emotional illness, extended alcohol and drug rehabilitation, radical history classes with an emphasis on the intersection of sexism (bell hooks: Men, Masculinity and Love), racism, and class analysis, and a commitment to grass roots community based organizing as a humble servant to the people. “What would you like me to do next?” I understand that at this time he is not someone that can be trusted, or someone for that matter that folks want to build community with, but, what have we got to lose other than another political yes-man who serves his own personal interests and those of the elite ruling class? Besides, restorative justice, if not offered to all, is not really justice, right?