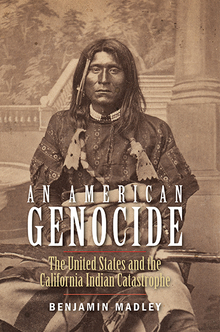 I recently joined a group inspired by a Ceremony of Apology and Forgiveness convened by Basil Brave Heart, a Lakota elder, which provided, among other things, an opportunity for settlers in the United States to apologize for the traumatic treatment of the native people living for thousands of years before European arrival on what became the US. The group is focusing on local history and our own relationship to the land. As guides to our process we plan to answer the following questions: What does being a settler mean to you?  What does it mean to be connected to this Land/Place (traditional Pomo, Coast Miwok, Wappo and others lands)  as settlers? Who are your ancestors? How did they (or you) come to settle in Sonoma County? What is the impact of the genocidal history in California and Sonoma County on your sense of place and belonging?

A friend I invited into the group immediately suggested American Genocide as an excellent source for history on California Indians during Spanish colonization and American settlement. I ordered the book and set myself to read it as my introduction to the work we are undertaking.  I hadn’t fully known what I was getting into. The author, Benjamin Madley,  sets out to show that according to the United Nations definition of “genocide” the policies and actions of the California government and the U.S. Federal government constituted genocide against the many different tribes of California Indians. Madley does this by detailing the killing of people living in California for thousands of years by newcomers from what had recently become the United States.

Recording the numbers of California Indian people killed is not a mere academic exercise. As anyone who has ever lost a loved one knows, the death of a single person is a profound loss. Recording how many California Indians were killed between 1846 and 1873 is, in part, an attempt to understand the magnitude of the rupture and profound pain caused by their loss: each murder severed personal, familial, and tribal links. Each was a tragedy. When multiplied by thousands during a short period, the impact was nothing less than devastating. In the context of genocide, recording deaths also dignifies the slain and gives a voice to the departed. (Madley, pg 13)

After reading the introduction with its promise of horrors to come, I made a commitment to myself to read the book closely and not skip through it, to take time every day until I finished, allowing myself to absorb and feel what the author describes as “the California Indian Catastrophe.” This was painful to do and I am immensely grateful for the book. Madley presents detailed research on individual killings, mass murders, campaigns of annihilation, anti-Indian legislation, forced servitude/slavery, and other actions against California Indians within an analytic context describing how the greed of capitalism, combined with a European system of thought that assigns Indian people a less-than-human status, produced a “killing machine.” The intent to eliminate Indian people was publicly stated and supported by many powerful men, men whose names now identify banks, universities, civic buildings, towns, and more. Some attempted to justify their views by the myth of inevitable extinction: it was sad that Indians had to go but their time was over and it was time for civilized men to replace them. Stating that it was the Indians fate to be annihilated, helped hide individual and government responsibility for mass murder.

As Madley documents the destruction of Indian villages

and whole bands of people he also provides descriptions of their homes and cultural practices, including the ways in which they lived from the land and how they tended and honored their ancestral place. Gold mining, agriculture, and livestock production all seriously disrupted the food supplies of Indian people. I want to create another unfolding of Europeans coming to California where, as newcomers to this place, they approached the Indians and asked to learn how to live in harmony with the land. No need to overrun meadows with cattle when deer and elk were already there. No need to cut down trees and divert creeks for irrigation of wheat when acorns were in abundance along with many grasses and other plants.

I find something seriously wrong with a system of thought and behavior that produces people who cannot appreciate, or even see, the world of balance and beauty created by California Indians. Something clouded the eye and mind of white settlers in California such that it became impossible to learn from those already here, numerous tribes with unique languages and cultural traditions who had established a comfortable existence in multiple environments. To the Europeans, difference from their own ways was automatically inferiority. Before European contact in 1542, it is estimated that 310,000 Indians lived in California and early accounts portray them as well fed and healthy. By 1873 the poplulation of California was still 310,000 of which only 30,000 were Indian. In 330 years Europeans/Americans had turned ten thousand years of culture on end, wiped out culture bearers, and left the survivors struggling to survive in a new world created to exterminate them. The carefully cultivated interrelated system of plants, animals, fish, trees and humans from which all benefited lay in tatters.

Anyone living in California would benefit from reading American Genocide. So much of the history provides perspective on events and policies of today. Knowing the dreadful actions of men with familiar names – Fremont, Stanford, Kelseyville, Lake Berryessa – means daily reminders of California’s past. As much as I wanted to look away from the calculated and treacherous actions of militias and vigilante groups, all supported and paid by the state of California or the Federal government, I need to really see what paved the way for me to live here on this land. I don’t see an ending to this essay as I feel reading American Genocide is a beginning. I hope you will also read this book and see where it leads.