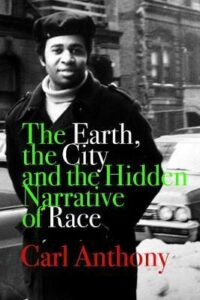 The Earth, the City and the Hidden Narrative of Race, by Carl Anthony, is a mix of personal, historical, and political. Anthony shares stories of his family and growing up, his youth at universities and in the civil rights movement, and his developing career as he found ways to combine his architectural training with the environmental movement and social justice. Recognizing early on that his formal education left out history of Africa and African Americans, he began a process of self education. Several highly condensed and informative chapters provide a history of West Africa that counters the notion of Africa as a “primitive” place at the time Europeans began to establish trading relations in the 1400s. He frames the history of the slave trade with the development of maritime cities necessary to the global trade comprised of enslaved Africans brought to labor in the Americas and the Caribbean and the resources and products extracted by their work and sent back for sale in Europe.

He examines the environmental cost of resources used to build the cities as well as those resources shipped on to other places. Focusing on the U.S. he asks the reader to acknowledge the enormous debt owed to African Americans who provided the labor that built the economic success of the new country and also to the indigenous nations whose land was taken by European settlers and government policy. “African Americans and other people of color helped to lay the foundations of the nation despite being marginalized in an atmosphere of hostility and disrespect.” (pg 1)

In the chapter “The Landscapes of Freedom” Anthony describes learning about abolitionists and the period just before the civil war. He also recounts the federal policies proposed toward the end of the war to help the enslaved African Americans establish themselves independently and how those policies were discarded or overlooked after emancipation and during reconstruction. This chapter contains information overlooked in school textbooks that is essential to understanding the racial inequities and divisions of today.

What made the history especially interesting to me, is Anthony’s insistence on viewing people within and connected to their environments, discussing architecture, agriculture and farming, Black towns, urban housing and challenges, and the many ways public policy maintained a racial caste system. He questions what influences the Africans brought to the U.S. may have had on American architectural style and farming methods as they tried to create environments similar to home.

As Anthony begins to write of finding his way into the environmental movement, he provides 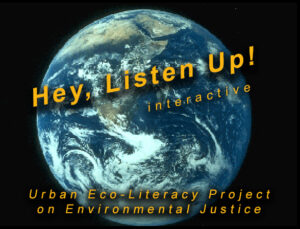 some history, with particular focus on how it started as a white movement and overlooked urban issues. For Anthony, bringing communities of color into the environmental movement– renamed environmental justice movement–is essential to its success. He believes it is clear that industrial growth is destroying the planet earth and to reduce our negative impact we must recognize that we’re all in this together. He states that “marginalized communities – subjugated economically and racially – have firsthand experience of what it means to build sustainability in the face of hardship. This cultural and individual resilience is a resource for leadership.” In the many city planning and environmental issue projects he has worked on through his professional career, the effort to bring African Americans and other communities of color to leadership positions has remained central.

The Earth, the City and the Hidden Narrative of Race gifts the reader with Anthony’s intellectual interests and environmental concerns as they intersect in the racialized world that is the U.S. The container for this story is the cosmic unfolding that places humans as the end product of 14 billion years of evolution and intimately connected to the web of life on the planet. Placing Earth in a central position enabled Anthony to put “restoration and justice at the heart of personal and social transformation.” (142)  He also argues that “we cannot make any progress in our damaged relationship with nature without taking the whole notion of race apart at the seams.” (147) 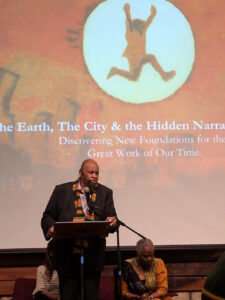 I believe that at this moment of Black Lives Matters protests and the public attention to white supremacy, Anthony’s memoir will enable many of us to gain a deep understanding of why the issue of race is so important and why our survival is linked to dismantling white supremacy. Reading the book took me to many familiar places via new paths, connected the familiar in unexpected ways, and exposed me to unfamiliar landscapes I hope to explore further. Whether you enter through an interest in environmentalism, architecture and urban planning, or race and social justice, The Earth, the City, and the Hidden Narrative of Race will draw you in and leave you wishing the book continued past the last page.

The Earth, the City, and the Hidden Narrative of Race, Carl C. Anthony (New Village Press, 2017)