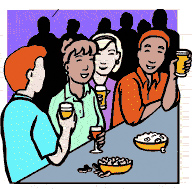 A couple of weeks ago we had an impromptu gathering at our home with a group of friends from Nepal.

They are quite a bit younger than myself and are always ready at a moments notice to party with friends.  This usually includes a combination of beer and musical instruments and always proves successful.  They are great musicians and all around great people–socially conscious and heavily involved with their communities while working to build bridges with others.  My wife and I hold them in high esteem and are grateful for their friendship.  I am usually the only white person present at our gatherings and, being aware of that, I make an effort to be conscious of my speech and to not be that paternal dominator that every white male has in him.  Sometimes, however, it slips out.

Well, it slipped out, and it was gross. There was an uncomfortable silence that lasted about three seconds—the kind of silence where people avoid eye contact and go completely into their heads, thinking “please go away—please go away.”  I tried to move us along quickly to the next subject, or, we returned to playing music—I can’t recall.  I thought about it for days after, wondering/hoping “did the others miss it?  Did they not feel the sting?  If no one had picked it up then I’m off the hook, right?”  I could go back to believing that I was beyond that type of behavior.  I had been doing the work for so long that I didn’t need to even think about it, right?  But nope, it’s still in there, and it’s still as nasty and toxic and painful as ever.

That nastiness came from the depths—several generations back—rooted in a legacy of white supremacy and imperialist-capitalist-patriarchy on both sides.  It stumbled out of my mouth with an arrogant, bourgeoisie tone when I said to my friend, “Do you understand what that means?”  The words launched off my tongue like little mini-drones meant to keep brown folks at the bottom of the pyramid.  I felt the shame, but like a well practiced dominator; I smoothed it over quick style.  I searched for justification in my head (“it’s just a habit I picked up from working with ESL youth”) to make myself feel better while the rest of the folks, well practiced on the flipside, either internalized it or played the hollow bone and just let it pass through. 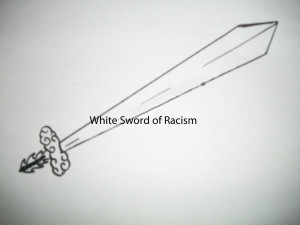 Sure it was not my intention to wield my condescending, racist-asshole sword, and it very well might be a bigger deal to me than the other folks that were present, but, that’s not the point.  Intention is irrelevant in this case—if you hurt someone, then you are responsible.  How big a hurt is also irrelevant—lots of little wounds are wounds none the less.  The point is that it came out of me, and it was everything but right speech and it was a weapon that I thought I had dismantled. My whiteness fucked up the moment.

When I got around to having the uncomfortable talk with my wife about my hypocritical behavior, what came up for her as a brown woman, and what came up for me as a white male, brought the pain right back.  My wife and I discuss the racial implications of most situations regularly and never is it comfortable.  We engage in these dialogues because it is a healing process and the alternative is not an option if we wish to have integrity as a couple and sustain our relationship.  We talked about the weapon and how I use it on her every time I question her understanding of a word or concept—making the assumption that she doesn’t understand.  She told me how she has heard it so many times throughout her life but never does it feel the way it feels when it comes from me because “[I am] doing the work – [I] study the shit everyday—[I] go to meetings and talk about how to not be a racist asshole…”  We talked about the context in which I asked my friend the question.  She reminded me “of course he knows what the word request means—he’s a musician.”  She said, “He probably didn’t give it much attention and the other guys were probably goin’, ‘I hope this white dude doesn’t ask me any questions,’ cause that’s what everyday-brown people are thinking when a white guy is doing most of the talking.”

I listened to her carefully and tried not to do most the talking. We processed the white-male-privilege hell out of the incident and concluded that the only way to right the situation was to share the story as a teaching in hopes that another white privileged person might recognize this behavior.  This experience served as a reminder that I carry within me that ancestral seed of domination.  And, although I spend much energy trying to terminate it, it sprouts the second I am not mindful.  “Sprouting seeds” is perhaps too kind of a metaphor to describe white-male supremacy and all its manifestations. Maybe gas is more appropriate. I passed white gas and stunk up the party. Have you ever done that?

One Response to "White Gas"