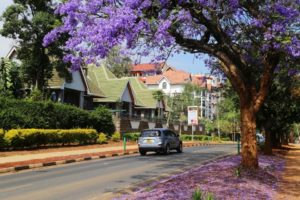 A friend offered us an evening of respite from dealing with the aftermaths of the fire—come over and do our laundry, take a good, long hot shower, eat turkey soup, and watch Netflix. Taking her up on it we arrived with our dirty clothes, shampoo, appetite and desire for entertainment to overwrite our mental task list. Settling onto the comfy couch and faced with the overwhelming choices on Netflix, we asked her to choose. She chose Sense8, explaining that even though it was initially confusing, the wide variety of characters and their interesting relationships had hooked her. The diversity included gay, lesbian, and trans folks as well as global racial and national differences. She started with episode 1, even though she was well into the show, and we watched three episodes in succession.

I thoroughly enjoyed the settings and snippets of community from India to Iceland, Kenya to Mexico—flashes of life from around the world. The central players fall into a range of socio-economic brackets: corporate executive, movie icon, DJ, police officer, van driver, and others I don’t remember. And the series doesn’t hold back on the sex scenes for many sexual orientations. Really wanting some mindless but engrossing entertainment I tried to put my critical, let’s deconstruct this, inner voice on hold. I was largely successful except for the handling of black people, both African and African-American. 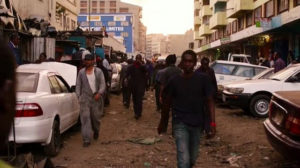 The central character, who lives in Nairobi, drives a jitney van and even so appears to live in poverty. None of the neighborhoods depicted of Nairobi were wealthy or even middle class. The driver’s back story was of destitution and hunger. All the tropes of Africa. Of course there is terrible suffering from hunger, illness, and displacement in many countries in Africa, including Kenya, but why choose this setting for Sense8? The central characters from Mexico and India were in top and middle (but marrying into top) economic brackets. In fact, none of the main characters other than the Kenyan van driver appeared in poverty.

The police officer character works in Chicago and the depictions of black people were primarily as violent gang members. A black nurse questions why the police officer bothered to save the life of a young black boy, asking “How will you feel if he grows up and kills a police officer?” This association of violence and lack of compassion with black people was echoed in the Nairobi scene, where the van driver is hijacked by a violent gang of thugs who rob all the poor people on the van. He then decides to chase after and retrieve the medicine he just bought for his mother, so the violence continues with more depictions of black thugs.

As I’ve only watched three episodes, it’s possible that in future episodes every racial type will be exposed as physically brutal, evening the score so-to-speak. At the moment I simply feel deep tiredness at the perversions of centuries long enculturation of white supremacy, which prevents movie makers from depicting black people in their full humanity.

Check out this Kenyan news article on Sense8.

And here are the top 10 dynamic neighborhoods in Nairobi.