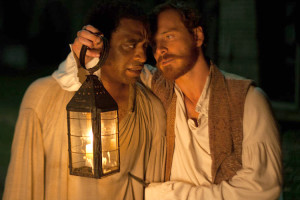 When I saw 12 Years a Slave, the overriding impression that came through for me was the intense psychological drive of many of the white characters in the film to extract total submission and obedience from the black men and women they held in bondage. It wasn’t enough that those enslaved perform the tasks assigned, even to perform them extremely well or even beyond expectations: they had to give up their personal will, dissolve their protective psychological boundaries, and become nothing more than an instrument—a tool—of the master or mistress.  As portrayed,  one white master, so long as he sensed the spark of humanity within the black person, could not find peace within himself. So in a sense, given that each black being carried their humanity with them, the only solution was to kill them.

Walking out after the movie, I kept remarking on the craziness of the “bad” master, and the psychological damage evident in most of the white characters—men and women. But I couldn’t articulate fully what I sensed.  Later, in an article by Steve Martinot, on the recent upsurge in police killings of black men, I read his discussion of the need for absolute obedience from those living within a system that takes away their “inalienable” human rights. If those whose human rights are threatened by unfair laws or institutions protest or resist, it is a constant reminder to those who created (and possibly benefit from) the laws and institutions that the laws and institutions are morally wrong. It is the struggle to avoid acknowledging oneself as morally corrupt that I saw enacted in the brutal behavior of many of the white characters in 12 Years a Slave.  And the thought that the police killings happening with sickening regularity have to do with extracting obedience from black and brown men means that these police are also struggling with the (un)conscious knowledge that they are enforcing a morally corrupt system.

Reflecting on the movie and connecting my thoughts with Martinot’s analysis leaves me with more questions. Are there times when I feel compelled to extract absolute obedience? Certainly that impulse arises with children who are “supposed” to do as I say. Also with animals. I know I am familiar with the anger that arises when my will is thwarted. Although I don’t step into the realm of violence to extract compliance, in which situations is my expectation of obedience “immoral” to begin with?

And how do I apply these insights to my life as a white person both in personal cross-racial interactions and within a white supremacist system in general? I believe that my awareness of the immorality of the system I inhabit is so much a part of me that I’m not struggling to deny it. But I also have to acknowledge that I’m probably enforcing this morally corrupt system in ways I’m not even aware of.

One way I learn more, is by writing reflections such as these. Also, by attempting to apply the analysis in conversation with others and discovering where I get confused or angered. A friend writes to me “I think the idea of how white people avoid seeing themselves as corrupt and encourage their own exoneration is worth exploring and expanding. So for example, I’m not a police officer, but how do I never the less expect obedience from non-white people or how do I thicken a narrative of law enforcement/law and order being equivalent to good moral standing despite the obvious contradictions you point out.” I’m very much hoping for comments and real life examples from readers of this blog.

3 Responses to "Reflecting on 12 Years a Slave"