I was once asked by the parent of a 4th grade student I was working with, “how do you intend to define justice for the young people in circle?” I answered without hesitation, firm in my belief that justice is equity. I used the pizza example that I often use in which I describe a scenario where a pizza is offered to a group of youth and a conversation ensues regarding what is fair in regards to the distribution. The group often unanimously offers that everyone should get equal portions—fairness amounts to equal slices. I have found that this is the status quo agreement. This has been our teaching/conditioning. I then ask them, “what if we knew that someone in the circle needed more food than the others based on the fact that they have not been able to have enough due to circumstances not their own? Would this change your definition? Would it be fair to offer Sarah some extra slices knowing that her family lost their home in the fires and have been struggling financially ever since? Or, offer extra to Robert knowing that his parents both lost their jobs recently and are also struggling to meet the needs of their children?” I then explain how this perspective requires an effort to listen to peoples stories, understand the context of their stories and who holds the power to decide what justice looks like within that context. “Courts will have to be transformed into places where people can come and tell the story of their humiliation and dehumanization at the hands of social institutions, at the hands of other people, and at the hands of a culture of contempt, and be respected in the telling and in the response,” says Steve Martinot, in his piece, “The Need to Abolish the Prison system: an ethical indictment.”

Who has the power to define justice? The Judge? Boss? Principal? Teacher? The state? The Sheriff? The street? Does justice always look the same? Who is the authority on this idea of justice? Is Justice freedom from oppression? Reader, how do you define it? What would it look like for indigenous communities, victims of settler colonialism, descendants of enslaved Africans, victims of U.S imperial invasions— the people of Laos, Philippines, Guatemala, Iraq, Syria and on and on? Incarcerated brothers and sisters, what do you say about it? I wonder how Andy Lopez’ family feels about justice. Sandra Bland? Stephon Clarke? What do the many folks without houses all over Sonoma County have to say? The students walking out in protest of gun violence? Youth of color who have been organizing in resistance to gun violence for years but who have been silenced, and disregarded, and, intimidated, and profiled by law enforcement? Youth of color being held to lower academic expectations? People of Pine Ridge, Standing Rock, Water Protectors? Women at risk of sexual violence in their homes, at work, at school, in the park, at the gas station, in the rest room, what do you know about Justice? LGBTQ folks, what does justice look like, feel like, taste like, for you? Undocumented folks? For your communities? I look to all of you for the answer—knowing well that your answer will be challenged by those who have decision making power but are not necessarily stake-holders in the outcome. 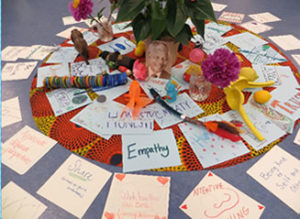 I am confident, however, that by asking those most marginalized in society—those most harmed, most oppressed, the true stake holders—that I would get closer to the truth. I would start with the original peoples of this continent—those who have been practicing a form of peacemaking that involves centering relationships, healing, restoring dignity, and reintegration into a community of shared values, those who laid the ground work for what we now sometimes refer to as “restorative justice,” long before the magical, mythical, discovery of America.

As someone who works in the restorative justice field—there are not many of us—and, as someone who makes an effort to be involved in movements for social change, social justice, I jumped at the opportunity to write an article about “justice.” I know something about justice, I thought; I talk about it every day—it’s actually in my job title “restorative JUSTICE circle leader.” I would share my analysis hoping that people with power will read it and perhaps they would understand on a deeper level the work we are doing and align with my definition.

I would begin, as one might guess, by doing some research around the roots of the term itself. “Iustitia,” from the latin, meaning “equity,” and, “righteousness,” aligns with the definition I have been using in my work—equating justice with folks getting their life-needs met. I would compare and contrast the highly visible criminal justice system, which could be looked at as retributive with a revenge ethic at its core in which the state ultimately decides what punishment you deserve, with the not so visible restorative justice practice, in which the focus is not on punishment in adherence to laws, but rather the need to heal relationships when harms are done. I would ask those with decision making power within our agency if they believed that we are an equitable organization. I would ask the youth what they think. Essentially, I would put onto paper all of the points that I attempt to make when I explain restorative practices to the youth I work with, their families, and the many people curious about this thing called Justice. I would recall what I often share in the critical dialogues that I lead with our youth: Context is everything, and if that context includes extreme power imbalances and abuses of said power, then the definition of justice will be equated with punishment.

If we are to accept the definition of justice as equity, then not only will we need to correct the power imbalances but also reconcile this idea of meritocracy. The myth of meritocracy, or the story that has been sold as the “American dream,” serves to perpetuate the power imbalances that cause so many individual and social harms. This idea that everyone in society has earned their social status by their own merit not only has tremendous negative influence on the way we as citizens relate to each other but makes it very difficult to agree on a common definition of justice. If you find yourself unable to move up the social ladder, living in low income areas, short on all resources, with very little access to opportunities for growth, well, it must be due to your own merit. In other words, you are the problem. You are not working hard enough (never mind that you work three jobs), not intelligent enough, not ambitious enough, not worthy. Believing this has the power to destroy the individual and collective psyche.

We know well the other side of the story: If you are wealthy, with property and assets, have access to many more opportunities to build on your social status, then you must be extra intelligent, ambitious, hard-working and worthy. Believing this has the power to inflate the sense of entitlement and inspire abuses of power to keep your position of power. One needs only to consider that most of the individual accumulated wealth in the U.S, has been passed down by inheritance—old money often acquired by land theft, broken treaties and state sponsored violence. Our African American citizens, let us remember, were exempt from the opportunities to collect wealth with the option of “passing it down” for hundreds of years. How do we restore this? Or, is the playing field equal now?

Buying into the myth of meritocracy narrows our understanding of justice allowing those in power to decide who deserves punishment and who doesn’t—who deserves a roof, clean water, and living wages. In relationship to historical, economic, racial and gender context, it informs our justice systems both institutional and informal. Perhaps then the question is: What does justice look like within the context of an utterly unjust society? And, once again, who do we ask?