Here is an account of a recent Copwatching incident—my first ever, and totally unplanned —in Sonoma County: 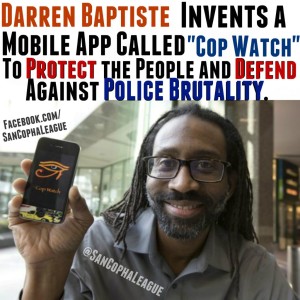 how it happened
I was in transit; a friend was dropping me off in Petaluma when we saw a cop car pulled over/parked on the street, unusual in this well-off neighborhood. As we started looking for parking, we heard a woman’s voice yelling/crying, and saw the cops bringing her in cuffs and putting her in their car. Did not knew what was going on. Decided on the spur of the moment to film just in case. We pulled in to a nearby driveway and hopped out.

what I did
I filmed the cops the way I had been trained (just watched a video about it the other day— “These Streets Are Watching” on YouTube: ). I just turned on my camera, switched to video mode, pressed start, shut up (so I wouldn’t talk over any possible audio evidence), walked calmly towards them while filming, and stopped about 10 feet away (it’s important not to interfere with their work), continuing to film. I forgot to film in “landscape” mode, though (usually shows more).

the situation
Turned out it was a 5150* (“pink-slip”) of a young woman by her mother. She was quite distressed, pleading, crying, explaining. They had her in cuffs, in a cage in the back of the car. She asked to be allowed to take her sweatshirt off, said she felt like she was going to be sick, said it wasn’t the first time and that last time “they” had not believed her and held her for 15 hours; the police ignored her pleas, told her something about what would happen when they got her to Kaiser, got in the car and drove away. But not before one officer came over and asked me my name.

our interaction and what I inferred from it
I do not believe there has been any copwatching presence in Petaluma. This cop had 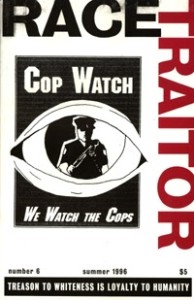 clearly been trained what to do (he audio-recorded me giving and spelling my name), but looked flustered—started to try to write down my name, failed (no pen?) and then asked me to start again after he got his hand-held audio recorder turned on (and back into his chest pocket). If it had been on before he started talking to me I would not have been aware I was being recorded. Judging from his behavior, I would not be surprised if this was the first time he’d ever been filmed by a bystander. He made a point of explaining that he wanted my name so that if they needed the video to prove something for their case, he could subpoena me and my video. It felt like intimidation, but I don’t know; maybe he was just informing me of the facts. He was courteous. Anyway I wasn’t going to stop filming, so our interaction is part of the video. He didn’t ask me to stop, just asked me why I was filming (“just to observe police activity,”) I said, or something that. I knew it was my constitutional right, and from the film I had been reminded that asserting those rights, like exercising muscles, is the way we keep them. He also asked if I was involved with the incident. I said no, but remembered that the YouTube video had told us to avoid discussing anything, beyond giving our names, with the police (including possible undercovers: just say, ‘I do not consent to this conversation,” and shut up again.) Fortunately, I didn’t have to go there; that was the end of our conversation. That is, after I got his name and badge number.

badge number not visible
The cop who asked and audio-recorded my name had his badge number obscured by a black bar angled across it at 45 degrees, about 1/3″ thick. It looked like a badge holder, possibly sewn in or on to his uniform. If it’s standard, then all the cops in town probably have their badge numbers obscured. This is in violation of their legal requirement to have their badge numbers visible, to my knowledge. Anyway I had to ask him for his name and badge number before he walked away, so I got that on film, too. And I stated on film that “I can’t see it” (his badge number). Because I couldn’t. Thankfully the video makes that problem very clear.

why film law enforcement?
It is my belief and I believe that of Copwatch that routinely filming the police is a preventative action: at the time of a particular incident, it discourages abuse, and doing it at any time (whether there’s anything abusive going on or not) puts them on notice generally that there are eyes of community accountability out there, discouraging abuse generally. I assume this cop reported the filming to his department, so I assume the department is now on notice.

have a friend/buddy/witness
Even though we hadn’t planned this (or maybe especially so), having my friend there as my buddy gave me more confidence to just jump out there. The video recommends copwatching in pairs. My friend didn’t have to do anything, just stand there nearby.

what about those obscured badge numbers?
I will look for buddies to help me bring this up (do not want it to become personalized/about me). Maybe those of us who spend time there can observe and photograph Petaluma cops in other circumstances (gather more evidence) to see whether this problem of badge numbers being obscured by a black bar of fabric is a common problem first. It’s serious business if there’s a real incident and you can’t see the badge numbers—if people don’t get the cops to state their badge numbers and they are not recorded, even cities with citizen review boards will not prosecute. I have personal experience bringing a case in another city and even with testimony by named individuals present, in-person testimony of myself and a friend who was also a witness, and photographs, no action was taken. One way or another, get the badge numbers!

being prepared for “next time”
I am going to get the ACLU copwatching app (called “Mobile Justice”) on my phone so any video I take from now on will go up to the ACLU in real time, in case the phone gets confiscated (you never know). Get it here: https://www.aclu.org/feature/aclu-apps-record-police-conduct

how about you?
I encourage you to go on YouTube and watch “These Streets are Watching.” It’s maybe an hour, well worth your time. Tell a friend who might be your buddy sometime to do the same. While you’re at it (if you have a smartphone), go get the ACLU app. You never know when you’ll suddenly be in a situation like I was, with the opportunity to make a difference by filming. Will you, your phone and your buddy be ready?

* If an individual is 5150 certified, the person will be taken to a psychiatric hospital and can be legally held for up to 72 hours.
More here:  http://www.toddlertime.com/advocacy/5150/5150-law.htm