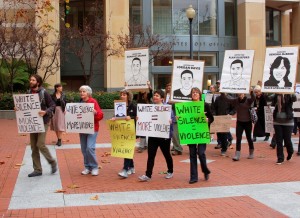 At the July dialog on White Silence, 63 participants showed up for the meeting, creating an energetic buzz of voices. We were meeting in response to people of color calling out for white people to speak up. The need for active confrontation to the status quo of white supremacy, exemplified most recently as resistance to police violence, has been shown as slogans: “white silence = violence”; “white silence = consent”.  This silence covers a wide range, from letting micro aggressions happen that could be interrupted to failing to hold the police accountable for their use of force. Folks with white skin privilege are increasingly stepping up as due to organizing by Black Lives Matter, immigrant rights groups, the prison abolition movement, and other people of color led groups. However, despite a rich history of white anti-racists who risked livelihood and life to resist white supremacy, and the intellectual understanding of the need for white voices and actions in dismantling white supremacy, many white people still have difficulty in overcoming fears of speaking out. So the first activity was to provide a list of reasons/excuses for white silence. The lists included the following:

Fear of violence/being yelled at/
Fear of not doing enough
Fear of making the movement look bad by what you say
Fear of not knowing enough
Hopelessness to create change
Actual ignorance of how racism/oppression works
Not knowing how to speak up – sometimes due to gender conditioning for women
System is too big to affect
No backup
Indifference
Too much emotion to speak coherently
Fear of being shunned
White guilt
Sense of no right to speak about oppression
Individualism
Not knowing what to say in the moment
Avoiding family conflict
Expecting others to do it
Fear of being attacked
Lack of personal experience
Letting oneself off the hook with a superficial comment; inadequate response
Fear of making it worse for people of color/the specific person of color
Ineffectiveness
Fear of being too radical
Don’t know where to start
Lack of communal engagement
Fear of being labeled as a person of color

Having heard the testimony that generated this list, participants spoke out to say that many of the fears relate to comfort. Creating change is not going to be comfortable. One needs to take a chance on being less-than-perfect in response and learn from doing. And if you are lacking the knowledge needed to analyze and respond, it’s time for homework – read, go to events, watch films, talk with white allies who have been doing the work longer. 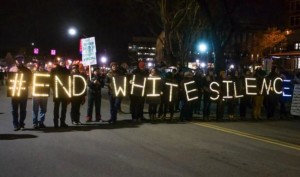 In listing reasons, most participants used examples of individual interactions with other people to provide context for their excuses for white silence. Such as, feeling hopeless about efforts to create change in the person who just uttered a racist comment. It’s important to also consider how we might feel hopeless faced by the institutions that support white supremacy. For example, I might feel hopeless in affecting change in the educational system that continues to teach a white-centric curriculum and so not bother to speak up in school board meetings.  Later in the dialog, a participant offered as an example of a recent action, starting a diversity group in her children’s school to speak out about issues with the educational institution rather than letting silence serve as tacit approval.

We closed the dialog by forming action groups and exchanging contact information. Many mentioned the importance of feeling part of a community dedicated to ending white silence and supporting each other in being part of a movement to expose the unearned privilege of white people and reconstruct the institutions that maintain white supremacy to become truly equitable.

An excellent resource on white silence, listing several main reasons white folks feel that can’t speak up and analyzing them carefully is “Nothing to Add: A Challenge to White Silence in Racial Discussions” by Robin DiAngelo, which “analyzes a common dynamic in interracial discussions on race: white silence. Using whiteness theory as the frame, I explicate the common white rationales for silence in discussions of race and challenge each of these rationales from an antiracist framework. These rationales include: “It’s just my personality—I rarely talk in groups”; “Everyone has already said what I was thinking”; “I don’t know much about race, so I will just listen”; “I don’t feel safe / don’t want to be attacked, so I am staying quiet”; “I am trying to be careful not to dominate the discussion”; “I don’t want to be misunderstood / say the wrong thing / offend anybody”; and “I already know all this.” I argue that regardless of the rationale for white silence in discussions of race, if it is not strategically enacted from an antiracist framework, it functions to maintain white power and privilege and must be challenged.”