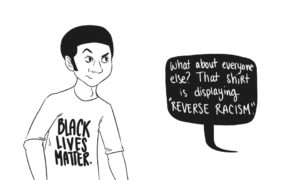 Cartoon by Julien Balbontin, The Varsity

Racial Justice Allie’s April dialog was on the topic of Reverse Racism. Below you’ll find the agenda, notes from the facilitators, and some of the outcome of group discussions. Also, a list of resources for exploring the topic of reverse racism.  Lillie Dignan and Wendy Millstine facilitated this dialog.

What is Racism?  Before we get into the main focus of this workshop, reverse racism, let’s start with the basics and define racism:

A standard and simplified definition states that racism is a “prejudice, discrimination, or antagonism directed against someone of a different race based on the belief that one’s own race is superior.” Most of us here tonight are probably very much aware of the societal ways which continue to sustain and perpetuate racism, such as our police departments, political system, education, housing, economic barriers, the prison system, and so on.

EXPLORING THE MYTH OF REVERSE RACISM

What is Reverse Racism? At this stage, we would like to explore in more depth the myth of Reverse Racism by posing the question:   Can White People experience racism? In other words, can whites be victims of racism at the hands of people of color?

The quick answer would be NO, but let’s explore why, particularly drawing from the critical analysis and feedback from mostly people of color (such as writers, historians and anti-racist organizations) who have shed light on why Reverse Racism does not exist. Let’s be clear from the outset, white people can experience prejudice and discrimination in our society, without a doubt. But what are the special nuanced differences between racial prejudice and white prejudice? For starters, Racism exists in great part due to our dominant history of white colonization, slavery of African Americans, the genocide of Native Americans, and white-dominated institutions and systems of oppression that have continued to keep people of color from acquiring the same rights and access to power as white people. In other words, Racial prejudice exists because of a historical power dynamic that perpetuates systemic racism against people of color. Whites benefit, for the most part, from being a part of the history where whites are continually in the dominate position of the oppressor over the oppressed. Racism requires power and prejudice. White people historically have the power to oppress people of color because they control the system and economic structures in society.

Now, let’s explore reverse racism or the notion that a person of color can inflict racism against a white person, another layer deeper. I’ll start with a recent personal story: I had a very close white friend say to me that while living and working on a reservation, she experiences reverse racism daily. She gave examples such as being excluded from Native American ceremonies and being told that her whiteness isn’t welcome at certain work meetings and so on. I tried to validate to her that she was experiencing prejudice on some level by people who were judging her based on her whiteness, but they were also calling out her power and privilege within a dominant white power structure. She got extremely defensive when I brought this up. I also pointed out that the notion of reverse racism was invented by white people, quite possibly white supremacists, who felt cheated and displaced by such things as Affirmative Action on college campus and employment opportunities.

The propaganda behind the term reverse racism is ultimately to dilute the actual meaning of racism. It is also a term that is used for scapegoating people of color in order to create a target for white people feeling excluded. For example, if you claim that your white son or daughter was excluded from college because a person of color’s application was chosen over a white person’s application, then you can cry reverse racism. This argument would be true if white people in America had a long history of being the non-dominant group who was subject to many years of systems and institutionalized oppression, in other words, if white people had experienced a history of being colonized, enslaved, racially profiled, racially imprisoned and so on at a rate unprecedented when compared to person of color. Sadly, it was difficult to convince my friend of my assertions and so we left the subject unresolved. I hope to talk more with her and keep the dialog open in the future.

Conversation tips and strategies for talking about the lie of reverse racism with others:

Ongoing Education / Resources
We encourage you to continue deepening your understanding and sharing with others. The following are some resources that we referenced while developing this dialog.