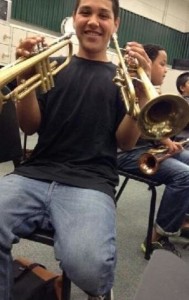 The mission of Racial Justice Allies of Sonoma County has been to create a space in which white people can explore their social position, work to be better allies to people of color and develop a sense of responsibility for the manifestations of racism. Responsibility. Response-ability. It begs the question: What kind of response should white people have to the heart-breaking assassination of 13 year-old Andy Lopez?

There is of course no one answer to that question. However, my hope is that the response would create some solidarity with a community of color that has a long history of police harassment and brutality. In mentioning race I may be accused of “playing the race card.” However, in not considering race and the history of race in this community as a significant causal factor to this tragedy, I would being playing a different race card—the white supremacy race card. By not mentioning race, we blind ourselves to a deep and painful reality and in doing so, prevent ourselves from being response-able. Further, in looking at racial implications, as white people we have the opportunity to learn about ourselves and the culture we live in and thus become more capable of acting in solidarity with people of color.

Currently, there are many questions specific to the police shooting of Andy Lopez. Many are asking if the deputy acted out of fear or aggression, why young Andy had such a realistic looking toy gun, why he didn’t put down his gun, etc. These questions may or may not be answered. However, looking at the shooting in the context of U.S. history, and even just Sonoma County history, reveals a pattern that sheds some difficult clarity on the situation at hand. The important questions are questions about a manifestation of a larger disease. The ability to respond effectively requires asking questions about the underlying disease. Some local examples, that are but a few of countless national examples, can help us do this.

Sujey Lopez is not the first mother to be grieving the death her teenage son at the hands of Sonoma County deputies. In March of 2007 Jermiah Chass, a 16 year-old African–American boy with mental health struggles was shot dead by deputies despite being cornered and alone in a mini-van with a knife.  Other men of color have also been killed by local law enforcement. A month after Jermiah Chass, Richard DeSantis, and unarmed man with mental health struggles was shot dead in his drive way by SRPD. In 1997 Kuanchung Kao was shot dead by Rohnert Park Police who believed that because he had a broom handle and was Asian that he was experienced in martial arts. And yes, white people too have been killed by local law enforcement. However, a second example illustrates a disturbing discrepancy.

Just two weeks ago a startling incident took place in the upper-class Sonoma County neighborhood of Fountain Grove.  A white man named James Carl Provost fired four bullets out his window at his wife and a locksmith. An 11-hour stand off proceeded and eventually he was arrested. Not only was he not shot dead (despite having a REAL gun), he was not even charged with attempted murder. I do not mean to imply that James Provost should have been killed. However, did not his social position as a white, wealthy man possibly save his life? He was given roughly 11 hours to drop his gun. Andy Lopez was given roughly 11 seconds.

The obvious implication is that if you are white you are simply less likely to be killed by law enforcement. There is quantitative and qualitative support for this. Researcher Arlene Eisen in solidarity with the Malcolm X Grassroots Committee created a 2012 report on extrajudicial killings in the black community. In her report Operation Ghetto Storm, she highlights the fact that every 28 hours someone inside the United States, employed or protected by the U.S. government kills a Black child, woman or man. We can also look to the Stolen Lives Project which publishes annual lists and pictures of US Citizens killed by law enforcement. Overwhelmingly these faces are black and brown. The Stolen Lives project is a project of the October 22nd Coalition. October 22nd is the National Day of Protest Against Police Brutality. It is also the day Andy Lopez was killed.

One question being asked is why was Andy was walking around with such a realistic gun? This question implies that Andy was somehow at fault, not so different from a rape victim being asked why she wore such a short skirt. The same system that creates rape culture creates gun culture. And sadly, the same system that killed Andy Lopez blatantly encouraged his interest in guns. In August of 2011 the Sonoma County SWAT team held an event that amounted to a gun show for kids. This took place in South Park, a low-income neighborhood of mostly Latino, Native-American, and African-American families (Press Democrat article). Children of all ages had the chance to pick up and play with unloaded firearms, including assault rifles. One would think in a country in which the right to bear arms is held more sacred than the right to food, health care or education, that Andy would be rewarded for his interest in firearms. While it is not known if Andy himself was there, it doesn’t matter because Andy lived in a culture in which the police encouraged people like him to be interested in firearms, an interest he paid for with his life.

So what does this say about us as white people and our ability to respond? I propose that white privilege makes us white folks unsafe. In viewing communities of color as potential danger (and thus increasing police presence, bias sentencing laws, and inaccurate stereotypes) we scapegoat violence onto those communities. After all, it is usually white men who are the triggermen 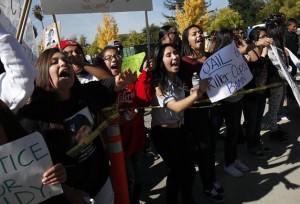 in school shootings and other mass shootings.  As well, most violence committed by Latino or African-American males is committed against someone of their own race. Our white privilege insulates us from response-ability, thus compromising our own humanity. When we do not effectively respond to situations like this we allow these situations to continue. No response is itself a response. If we do not take response-ability for creating a community that is safe from racialized police violence then we perpetuate that violence. If we see ourselves as compassionate and just people but do not act to address the disease, not just the symptoms (that is to say the system and not just the individuals in it), then our humanity and our community are compromised.

What to do? In 2000 the United States Commission on Civil Rights admonished Sonoma County to create an office, independent of the D.A.’s office, to investigate police abuse. This did not happen. It is not a surprise to some that the system again failed to hold itself accountable. Individuals have taken action. Local activists have set up a Police Accountability Helpline (542-7224). As well, Cook Middle School students and other of Andy’s peers are actively organizing a response. We can support these events (listed below) by attending, spreading the word and talking to those students and asking what they need from us. We can be looking inward at how even our previous responses to police violence have allowed the system to continue. We can do this by questioning the very systems that protect us but harm others—the sheriff, the police, the mental health system, the firearms industry.

2 Responses to "Response-Ability and Andy Lopez"