The day after the protests against Milo Yiannopolous speaking at U.C. Berkeley, a colleague wrote that the Berkeley “riot” demonstrated the need for non-violence training on college campuses as a way to contain those who believe property destruction is an effective political tactic (in this case, Black Bloc revolutionary anarchists). Furthermore, the email continued, free speech matters the most when it is something we don’t want to hear. These sentiments reflect a common response to what happened at U.C. Berkeley – assertions that at Berkeley “free speech is dead.” Knowing something of Yiannopolous I felt uncomfortable with this analysis and was relieved to see this response posted to the faculty email. Following is an email sent out by Nick Perrone, who teaches in the Social Sciences while completing his dissertation at U.C. Davis in History. 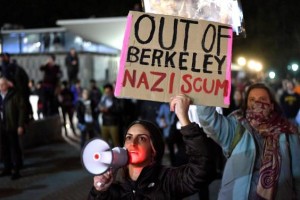 I appreciate the courage it takes to send a message like yours to all faculty. I was at the protest in Davis that turned violent, and I would have been in Berkeley if I did not have to work. I also appreciate your sentiment for a community of nonviolence. I too wish that we could have a more civil and better-informed discourse that might lead to greater understanding. However, I want to push back a bit on your sentiment for nonviolence and the notions of free speech that you advocate. Free speech is not unlimited. The usual citation is “falsely shouting fire in a crowded theater,” and I think Milo Yiannopolous’s hate speech qualifies as “falsely shouting fire.” Dozens of UCB faculty signed a letter to the Chancellor stating “Yiannopoulos’s views pass from protected free speech to incitement, harassment, and defamation once they publicly target individuals in his audience or on campus, creating conditions for concrete harm and actually harming students through defamatory and harassing actions. Such actions are protected neither by free speech nor by academic freedom.” 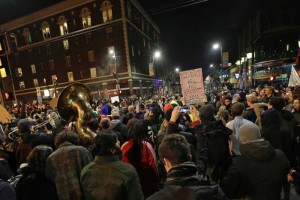 Over a thousand gather to protest Yiannopoulus speaking at U.C. Berkeley

In the wake of his visits to campuses across the country there have been hate crimes committed toward transgender, Muslim, and immigrant student communities. His visit at UW prompted one of his supporters to shoot and critically injure a protester who was trying to de-escalate a confrontation. When he visited Davis, his supporters included self-avowed neo-Nazi and founder of “IdentityEvropa,” Nathan Damigo. He brought his fellow Nazis to try to intimidate and bully students. I saw this happen.

In the wake of Yiannopolous’s visit to Davis the Davis mosque was vandalized, and “KKK” was etched on bathroom stalls on campus. While at UW-Milwaukee he outed a transgender student during his speech. He posted a picture of her and encouraged other students to harass her. The student has since withdrawn from the university. He was banned from Twitter for encouraging his followers to harass Leslie Jones. His followers threatened to rape, kill, and commit other horrendous crimes against her and her family.

Richard Spencer, the neo-Nazi who was recently punched on the streets of DC, prompting all sorts of debate about the morality of Nazi-punching, has published such gems as “Is Black Genocide Right?” There the author says that white people should be asking, “Does human civilization actually need the black race?” and if not, “what would be the best and easiest way to dispose of them?” Spencer is the one who coined the term “alt-right” as a way to normalize fascist/Nazi perspectives.

Yiannopolous is currently the poster child for the so-called “alt-right.”

You cannot have a peaceful discussion with people who believe that you do not have a right to exist. There is no set of facts that will convince Nazis and fascists to adopt a more open and multicultural perspective. Historically speaking, Nazis and fascists only respond to physical violence and direct opposition (see WWII).

Also, MLK was not a static individual and his views on violence evolved as he saw that the wheels of justice moved too slowly, or not at all. While he may not have encouraged riots, he certainly understood them in their context.

In a speech to the American Psychology Association in 1967 he said, “Urban riots must now be recognized as durable social phenomena. They may be deplored, but they are there and should be understood. Urban riots are a special form of violence. They are not insurrections. The rioters are not seeking to seize territory or to attain control of institutions. They are mainly intended to shock the white community. They are a distorted form of social protest…

“Let us say boldly that if the violations of law by the white man in the slums over the years were calculated and compared with the law-breaking of a few days of riots, the hardened criminal would be the white man. These are often difficult things to say but I have come to see more and more that it is necessary to utter the truth in order to deal with the great problems that we face in our society.”

And in his 1968 speech “The Other America” he clarified his stance on riots and violence in the streets when he said, “It is not enough for me to stand before you tonight and condemn riots. It would be morally irresponsible for me to do that without, at the same time, condemning the contingent, intolerable conditions that exist in our society. These conditions are the things that cause individuals to feel that they have no other alternative than to engage in violent rebellions to get attention. 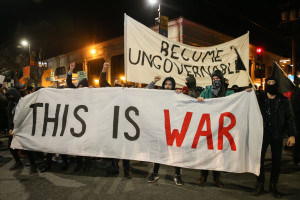 Yiannopolous is not just using speech that “we do not want to hear.” He actively incites violence. He uses his position of privilege and power to reinforce notions of patriarchy and white supremacy. His former boss at Breitbart is Trump’s chief strategist and is poised to hold a position on the National Security Council.

So it should be no surprise that at 3AM this morning Trump tweeted, “If U.C. Berkeley does not allow free speech and practices violence on innocent people with a different point of view – NO FEDERAL FUNDS?” This is not a coincidence.

The speech that they want to protect and promote is that which will reinforce their power. I find it difficult to believe that Trump would threaten to withdraw federal funds had a protest prevented a Black Lives Matter leader from speaking.

There are limitations to all of the rights and privileges outlined in the Constitution. Certainly most of us don’t feel so strongly about our obligation to defend the right to bear arms on campus. Is the Second Amendment less important than the First? Perhaps the reason that we don’t support the position that students should be encouraged to conceal and carry firearms on campus is that it might jeopardize their safety. Well if this is in fact how you feel about firearms on campus (and I sincerely hope it is), then you should also consider the fact that someone like Milo Yiannopolous has the ability to unleash the resources of thousands of his followers on a single individual, exposing them to serious threats to their safety.

If and when we allow the forces of evil to utilize the tools of a liberal democracy to destroy or transform it, we are standing by silently in the face of oppression. Violent resistance should always be a last resort, but to discount the language of the unheard is to be complicit in their oppression.

I would also encourage you to reconsider your use of the word “thug,” especially in terms of resistance and violence. One person’s nonviolence is another’s acquiescence.

Nick Perrone teaches in the Social Sciences while completing his dissertation at U.C. Davis in History. He has been an active participant in labor and social justice movements at the colleges and universities he has worked for.

One Response to "Is Free Speech an Absolute?"