We recently received a letter from one of our readers that we wanted to share with a wider audience.  The email letter is posted below.

Dear Blog Editor,
I believe capital punishment is one of the critical social justice issues of our country, and is, in many ways, the sharp edge of a deeply flawed criminal justice system.  With 143 convicted death row inmates exonerated to date, an increasing awareness of how race, poverty and geography determine who is sent to death row, and a growing number of states repealing death penalty laws or imposing execution moratoriums, it has become clear that, from the grassroots up, the United States is fundamentally questioning this draconian punishment and its biased, arbitrary application.

This is why I am writing today to let you know about my new book, I Am Troy Davis. 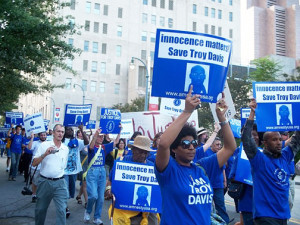 You may remember Troy Davis’s name:  On September 21, 2011 Troy was put to death by the State of Georgia, despite compelling evidence of his innocence. Troy’s execution was protested by hundreds of thousands across the globe, and broke new records on Twitter. Troy was named one of Time Magazine’s top ten influential people for 2011. How did one man capture the world’s imagination and become the iconic face of the campaign to end the death penalty?

I co-authored I Am Troy Davis with Troy and his sister Martina Davis-Correia, also working closely with other Davis family members in the lead-up to and aftermath of Troy’s execution. The book tells the intimate story of an ordinary man caught up in an inexorable tragedy. From his childhood in racially charged Savannah; to the confused events that led to the 1989 murder of a police officer; to Davis’s sudden arrest, conviction, and two-decade fight to prove his innocence; I Am Troy Davis takes us inside a broken legal system where life and death hang in the balance. It is also an inspiring testament to the unbreakable bond of family, to the resilience of love, and to how even when you reach the end of justice, voices from across the world will rise together in chorus and proclaim, “I am Troy Davis,” I stand with you.
It is my hope that the book will serve as a platform for education and mobilization around the death penalty and other egregious aspects of our criminal justice system. I am hoping that you may be willing to read I Am Troy Davis, and review or write about it on your “Racial Justice Allies” blog (as well as other social media platforms that you may be a part of), so that your online community will be aware of the book, and use it as a tool in their/your discourse and analysis of these critical issues.  I would also be very willing to engage directly with your readers in a discussion about the book and the issues it exposes.

I am including a link to a discussion guide about the book that was developed by Equal Justice USA, in partnership with Amnesty International USA, and the NAACP.

You can find more information about I Am Troy Davis here, including links to reviews.
Thank you so much for considering this request, and let me know if there is any further information I can supply you!

All the best,
Jen Marlowe
Author, I Am Troy Davis
www.donkeysaddle.org
Twitter: @donkeysaddleorg
Blog: View from the donkey’s saddle

Praise for I Am Troy Davis:

“Here is a shout for human rights and for the abolition of the death penalty. This book, I Am Troy Davis, should be read and cherished. It will inspire courage in the heart of those who are willing to use their efforts to save lives and increase the quality of life for all people.”
— Maya Angelou

“Like Trayvon Martin’s monumental murder, the execution of Troy Davis was a historic awakening for this country — an awakening of the deadly consequences of white supremacy. Don’t miss this book!”
—Cornel West, Professor of Philosophy and Christian Practice, Union Theological Seminary

“Martina Correia’s heroic fight to save her brother’s life while battling for her own serves as a powerful testament for activists.”
—Liliana Segura, the Nation

“Martina and Troy are heroes from a family of heroes. This story of their lives is also a call to action. It asks each of us to pick up where they left off by ending the death penalty once and for all so the risk of executing an innocent person is finally eliminated in America.”
—Benjamin Todd Jealous, President and CEO, NAACP

“Read this book, about Martina Davis-Correia and Troy Anthony Davis. The lives of this sister and brother were tragically cut short, one by cancer, the other through a cruel injection of a lethal, chemical cocktail in the final act of a profoundly unjust criminal justice system. This book captures their unflagging courage in confronting the challenges thrust upon them. More than history, more than eulogy, I Am Troy Davis is an urgent call to action.”
—Amy Goodman, Democracy Now!

“I Am Troy Davis is a painful yet very important book, one that will bring you face to face with the human impact of the death penalty system, prompt you to think deeply about the flaws in our criminal justice system, and inspire you to stand with all those who have been wrongfully placed on death row.”
—Susan Sarandon, Actor & Activist

“I Am Troy Davis takes readers on the journey of a remarkable family whose faith, love, integrity and convictions propelled their fight for their loved one and a larger cause. Jen Marlowe’s careful and sensitive collaboration with the Davises has yielded a narrative that will surely inspire readers to pick up the torch that Martina Davis Correia so bravely carried for social justice and human dignity with every ounce of her being and every day of her life.”
—Laura Moye, Amnesty International USA former Death Penalty Abolition Campaign Director