This morning, I woke up to this. Like many, many people within and without the black community, I followed this case intently and had (continue to have) definite opinions on them (the justice of those opinions is another matter) and, like many, I received the news not with anger or frustration but a sort of quiet sadness that is difficult to explain. I’m going to try, though, in the hopes that I can share some insight into what this case, and this verdict, mean for communities of colour in and outside the United States. 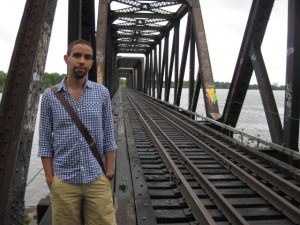 I wasn’t present when George Zimmerman shot Trayvon Martin, so I don’t know what transpired. I cannot peer into George Zimmerman’s soul, so I don’t know what he was thinking or with what intent he followed Martin down the street. What I do know is what it’s like to be a Trayvon Martin. To be suspect. I do know what it’s like to be followed by staff in a nice clothing store; to be stopped by police for walking down the street; to endure the thousand micro-aggressions and the hundred fearful looks, the patronising astonishment coupled with quiet indignation at my education or erudition. I know, in other words, what it is to be a person of colour in a world that privileges whiteness.

Deafness
While I cannot speak for my community I am certain that I am not alone in the sense that what many of us were hoping for with this case was a degree of vindication, a recognition by the courts of a Western nation that the racism we face is a real, day-to-day reality. I want racism to end but almost as much I want to stop being told by whites that it has. I want every white person I ever complain to about the years of piling slights, the extra hours at airport security, the half-seen glances from across the bus from eyes that fearfully refuse to meet mine, to respond with compassion and credulity and not to even think about explaining them away or ‘informing’ me that racism died with Rosa Park or MLK or whatever and they would know. I want white people to stop questioning my experience of racism, to stop defending every offender as ‘just doing his job’ or ‘just doing whatever.’ I want the excuses and the explanations to stop. I know where they come from. I know you feel accused. I know you feel that you are not racist (after all, you have that black friend and your maternal grandmother is Chinese). I know you think I’m being too sensitive or too quick to judge (after all, he didn’t call me a nigger and you didn’t notice any racism and you would know). I know that you feel like affirmative action gives me a leg up because you work just as hard and where’s your quota? I know it’s easier to pretend that racism is a thing of the past because you can get by just fine doing that so why can’t I? But here’s the thing: it’s not about you. You are not the one who is slurred, you’re not the one who is refused service, and you’re certainly not the one who is shot in the street. It’s about us. I want you to acknowledge that fact. To recognise that I experience racism.

This case offered me some sliver of that recognition, that vindication. The tantalising prospect that a white-passing man with a white name would be found guilty of murdering an unarmed teenaged boy for no other reason than his race and his hoodie filled me with hope that my plight would no longer be so easily dismissed, hope that made the slights easier to endure for its impending fulfillment and that prejudiced me against any possibility of Zimmerman’s innocence in any trifling legal sense. That is, I think, much of why this decision has been met with so much anger. Our hopes for a world where our voices would be heard were dashed.

Sight
Karen Grigsby Bates observed today that this case has confirmed for blacks and members of many other communities of colour, that we still need to wear protective clothing. We must still, in her words, appear church-ready whenever we walk out the door. I have long described to white friends the process of dressing (or otherwise self-presenting) to ‘white’ myself. The way I dress in an academic setting, the way I speak and write, the extra-curricular activities I put on my resume as a teenager, all carefully considered to avoid any shred of ‘blackness.’ Why? Because blacks with the gall to be black, to act and speak as you have deemed ‘black,’ are rarely deemed worthy of your respect. In this world you have created for me my blackness is a handicap I must not acknowledge, a loadstone around my neck that I dare not draw attention to because then I will be the ‘activist;’ the ‘angry black guy’ who doesn’t know that MLK fixed the system, reshuffled the deck so now that everyone gets the same hand but who still needs to be Snoop Dog; or worse yet I will simply be criminal and suspect, a potential gangbanger who might be carrying so we better stop him just in case. So I must perform if I am to get ahead or even to get by. And perform I will, because I want nice clothes and good jobs and to walk down the street unhindered by the authorities. I will do so to please you and you will think it right.

On the night he was killed, Trayvon Martin was dressed in a way that does not please you. He wore his hoodie over his head. In words well-practised from the press conferences and talking heads sessions that follow every high-profile sexual assault, police officials and pundits suggested that Tayvon Martin’s choice of clothing was a factor in his death. Some cried victim blaming, apologism. Others replied ‘prudence.’ Black voices intoned both. Whoever is right, Trayvon Martin’s clothing was not protective, instead it painted a target on his back and hung around his neck a sign that read ‘threat.’ Right or not, this ruling has reminded me why I prefer to let the rain fall unhindered onto my head.

Blindness
I have seen it observed more times than I care to count today that justice is supposed to be blind. This case, they say, was not about race. It was about a boy who was killed and the man who killed him. It was about evidence. Lord, how I wish I had the privilege of their naiveté. Lady Justice may be blind but George Zimmerman is not. If he were, maybe the sight of a teenaged boy wearing a hoodie after dark would not have frightened him so severely that he decided to follow that boy with a firearm at the ready. If the police were blind, maybe they would have charged a man who shot dead a 17 year old boy before mass protests forced them. If Lady Justice removed her blindfold maybe she would have seen that her scales were weighted against Trayvon Martin from his first breath. Maybe she would have known that by refusing to see the racial dynamics of the case before her, she was blinding herself to the very substance of the case.

Race was at the core of this case and race it why it became a symbol of such great weight and meaning. To us Trayvon Martin was not just murdered, he was martyred. In death he bore witness to the racism and oppression that blacks and other people of colour experience every day. Why was Trayvon Martin threatening to George Zimmerman? For the same reason that I am threatening to the mothers who claw their children back when I smile and wave back to them on the bus, the men who watch me like hawks when I pet their dogs on the street, and the staff who follow me in their stores. Everywhere I go I am a threat, an outsider, an other. I am a threat because you see me, or at least some of me, yet somehow you do not see this. In Trayvon Martin’s death and George Zimmerman’s trial the world, for a moment, saw. For a few short seconds all eyes turned upon a racially motivated crime, upon a black boy killed for blackness itself. But now the world has turned away because the court has comfortably ruled that blackness really is threatening and you really are justified in keeping watch for it in your communities and resisting it with deadly force. We were wrong, it seems. You will not see.
You will not see his martyrdom because it is woven into the fabric of your privilege, the cloth that the world has tied around your eyes. I will see it every time I look in the mirror, because in my brown skin is the crime for which Trayvon Martin died.

Speech
I’ve added my voice to the cacophony of this verdict in the hopes of granting a little insight to those outside my community to whom our response to the case has been opaque. I’ve done so knowing it will open me up to dismissal and scorn (after all, who am I to accuse you?). I’ve brought all my eloquence to bear and had a friend copy-edit my words because I know all too well the lesson we all learned from Rachel Jeantel: that black speech is suspect and blacks who speak publicly on race represent us all. In spite of that I’ve spoken only for myself, only from my own experience and perspective, because I can no more speak on behalf of blacks than you can speak on behalf of whites (not least because to some, I am not one). I pray that my words will not fall only on deaf ears and blind eyes.