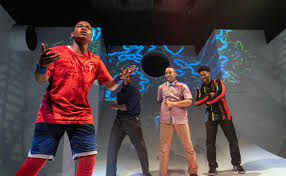 I’m sitting in the audience for a post-production discussion of Kill Move Paradise, a play in which four black men try to make sense of their recent killing. A white woman in the first row is speaking and I’m thinking Stop! Don’t you, a white woman, tell us what a black man feels, specifically Ta-Nahesi Coates – even if you heard it from your African American male friend. The feeling — “fear” — that you say he walks around in every minute was corrected by a black man in the audience moments later to “anger” as I sat there in anger at your presumption in telling us what black men feel and trying to figure out what to say. I wish I’d said it’s not our place as white women to be imagining what black men feel living in the white supremacist system of America, where even Berkeley is not excluded from the daily reality of racism for people of color. Our attention need not be focused on whether folks are angry, fearful, complacent, oblivious, vengeful, heart-broken, resigned, or any other feeling state we might imagine. Our attention needs to be focused on how we can address the inequities, right the wrongs of nearly 500 years, build a society where, even if I as a white woman clutch my purse and don’t smile at a black man on the street, he is afforded the same opportunities and pay and life chances as I am.

The phrase “learned helplessness” kept floating through my head as I listened to white audience members comment on how much they didn’t know, how children don’t receive African-American history in school, how they want to do something but aren’t sure how to be a white ally. The moderator suggested it’s not our fault if we don’t know the full story of U.S. history and the many manifestations of racism in the daily lives of black men and all people of color. I believe it is our fault. No one lives in this country without being aware on some level that things are not right, that equality and freedom for all does not truly exist. If we choose to suppress that awareness, tell ourselves soothing lies as a way of avoiding looking at the problems, it is our fault that we end up ignorant.

The woman who didn’t know how to be an ally, the man who wanted to find a group working against racism – if they were looking for a good restaurant that served Laotian noodles or trying to find a farmers’ market on Tuesday, they would have no problems using Siri or Google and have the info in seconds. What learned helplessness prevents them from doing the same when it comes to obtaining vital information about dismantling white supremacy?

As a test, I asked Siri “How can I be a better white ally?” Here’s what she found: “Guidelines for Being 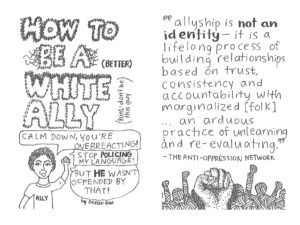 How to Be a White Ally by Ocean Gao

Strong White Allies – Racial Equity Tools,” “How to Be a Better Ally to People of Color – Giving Compass,” “White Anti-Racism: Living the Legacy – Teaching Tolerance,” “White Ally Toolkit,” and “How to leverage your privilege and become a better ally – WE.” By clicking on the “show Google results” link after the last entry I found many more listings.

I then typed “anti-racist groups in the Bay Area” into Google. SURJ (Showing Up for Racial Justice) came up first. Then Organize Against White Supremacy, Stand Against Racism, resources for Healing from Racism, The Ann Braden Anti-Racist Training Program, resources for Clergy, programs at the YMCA, and many other links to resources. Searching for “dismantling white supremacy in the bay area” turned up several more interesting items.

Much of what I’ve written here percolated overnight. Sitting in that audience discussion after the play I kept reacting to comments without words to express the internal response. With my two friends I could articulate some of what bothered me but what you can say with friends often needs refinement to be offered in public and understood. This is my public response as of the following morning. White folks: educate yourself. Join groups of others working to end racism. And as my friend said during the post-play discussion, have conversations about race at every opportunity, especially if it makes you uncomfortable.

Kill Move Paradise, written by James Ijames, takes the Elysium of Greek antiquity and flips the script. Set in a netherworld prepared for its newly deceased inhabitants, we follow Isa, Daz, Grif and Tiny as they try to make sense of the world they have been “untimely ripped” from and this new paradise they find themselves in. Inspired by recent events, Kill Move Paradise is a expressionistic buzz saw through the contemporary myth that “all lives matter” and a portrait of the slain, not as degenerates who deserved death but as heroes who demand that we see them for the splendid beings they are. I saw the Shotgun Players production directed by Darryl V. Jones.

One Response to "Aftermath of Seeing Kill Move Paradise"